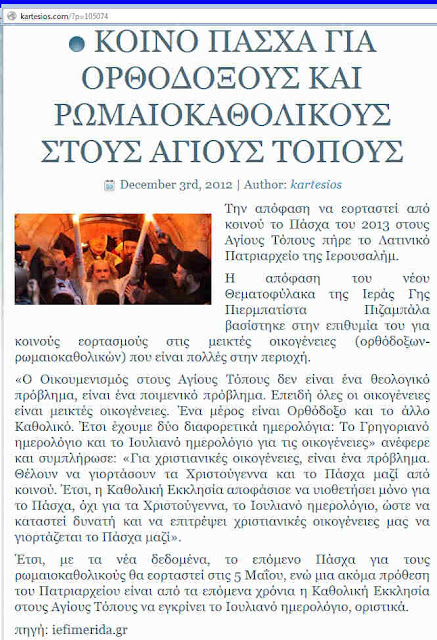 In 2013, the Catholic parishes of the Holy Land will celebrate Easter together with the faithful of the Orthodox churches on May 5, and not on March 31, as the rest of the world’s Catholics willGiorgio Bernardelli, RomaOctober 17, 2012

This is an important decision, as a major step in the ecumenical journey. The Latin Patriarchate of Jerusalem has made this decision, by means of a decree published today. The idea had already been anticipated by Vatican Insider a few months ago, and represents a significant ecumenical precedent. In practice, the Julian calendar will be adopted instead of the Gregorian calendar, as regards Lent, Easter and Pentecost, responding to a request which had also surfaced at the Synod for the Middle East, which was celebrated in 2010.The idea is that, at least in the most central moment of the liturgical year, the unity among Christians might be able to be expressed, and might thus help to overcome the paradox of a division which, until now, has even had an impact on the level of the home, since weddings between the faithful of the Latin and Eastern rites are quite frequent in the Holy Land.